Once known as the “Magic City,” the town of South Omaha exploded in population between the years of its founding in 1868 and its zenith as the site of the largest stockyards in the world. Since 1868, South Omaha grew exponentially; residents immigrated here from a host of countries in Europe and South America. The story of South Omaha is one of risk, dedication, perseverance, and above all, the grueling labor of immigrants.  Growing out of the muddy gully of a wild west town, South Omaha became the center for the meat industry in the Midwest. While wealthy investors and exchange commissioners provided the framework for the economy of the stockyards to flourish here, it was the work of the labor forces that maintained this industry which provided the impetus for thousands of immigrants to settle here in hopes of creating a life that would provide for their children and offer them a better future.

Not only did the stockmen, slaughterers and meat packers contribute to the economy of South Omaha; they also fabricated the rich and diverse culture of our neighborhoods. Each neighborhood had its specialty shops, restaurants and bars, cultural centers, and places of worship that catered to the taste of home for our immigrant ancestors. But this cultural connectedness was not without conflict. Certainly territorial disputes, racism, and discrimination left a print on such a colorful city. While we may recall some dark days in our history, we also must acknowledge the common values of all the residents. It was because of the respect for hard work held by the men and women of the Stockyards and packing houses, that there was some measure of unity among the various ethnic groups who made South Omaha home. Reliance upon one another to contribute to the work made concern over race of little importance. Today we see the same values persevere among the residents today. Still largely an immigrant population, South Omaha is as diverse as it ever was. In the neighborhoods and business areas of the town, honor in labor, education, perseverance and concern for one’s neighbor are presented in the small businesses and family atmosphere of South Omaha.
Click below on the thumbnails to read more about the imagery on the mural. 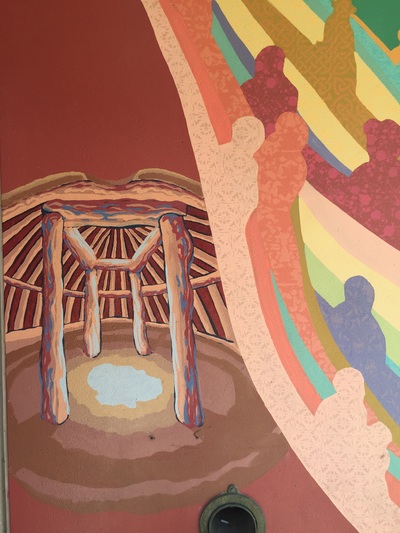 The Earth Lodge introduces our story. It represents the Umonhon people, for which the town of Omaha is named. The Umonhon built these dwellings on this land long before the waves of immigration began. 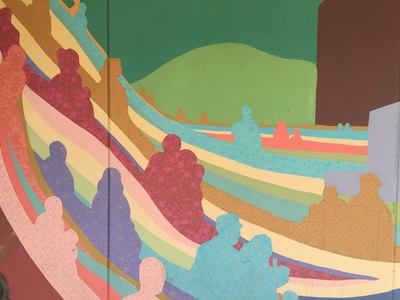 Waves of immigrants, mostly from eastern Europe began to arrive after Alexander Swan founded the stockyards in 1882. The patterns seen in the waves represent the cultural symbols, designs and patterns commonly seen on clothing and art from the different cultures the immigrants represented. 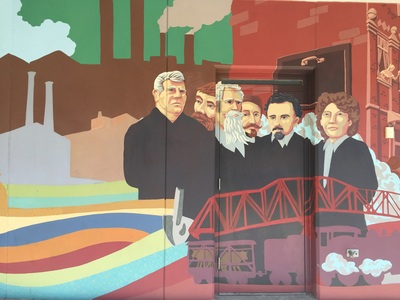 Originally arriving by train, the animals brought to the stockyards were sold to packing houses. These figures represent the businessmen, John A. Creighton, Herman Kountz, and William Paxton who formed the union stockyards. Also included is Doris wellman, the first woman commissioner who sold the animals at the market. 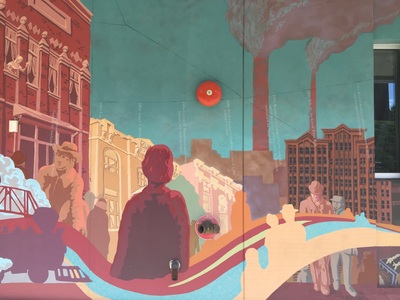 A number of images in the mural represent the historic buildings along 24th street in South Omaha. On the right is the third Union Stockyards building that still stands today on L street. It was designed by architect, George Prinz, and built in 1926 by Peter Kiewit and Sons. 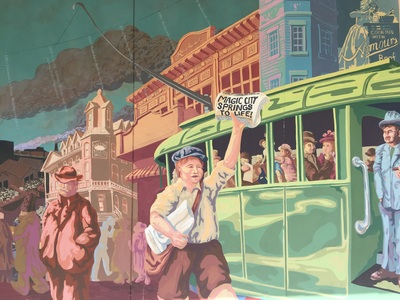 South Omaha was connected to the greater city of Omaha by streetcars that ran up and down 24th Street. Omaha was named the "Magic City" because of the rapid population growth. By 1890 Omaha reached a population of 8,000, making it one of the fastest growing cities in America. 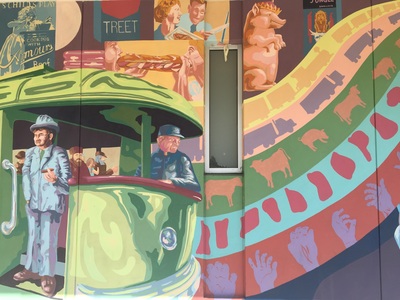 Above the streetcar are images of packaging from the four major packing houses at the site, Armour, Cudahy, Swift and Wilson. On the right, views of transportation, animals, cuts of meat, and the hand gestures of the packers demonstrate the rendering process. 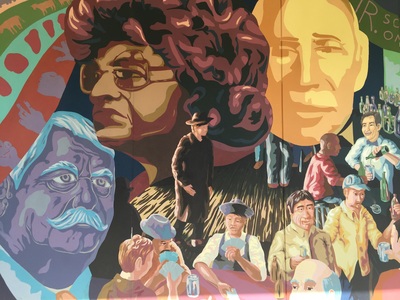 On the left is Everett Buckingham, a well-respected, philanthropic president of the Union Stockyards when the iconic building was erected in 1926. Rowena Moore was a strong activist for women, especially black women gaining access to jobs in the packing houses. On the right is Sam Greenberg, the founder of Philip's Department store. Goodman was dubbed "Mr. South Omaha" because of his concern and charity for the people of South Omaha. At lower left, a tavern is depicted. Because of the proximity to work, many taverns near the stockyards were places where all races and ethnicities came together to relax and fraternize after a long day's work. This was in contrast to the very segregated neighborhoods, where people of common ethnic backgrounds lived and socialized together. 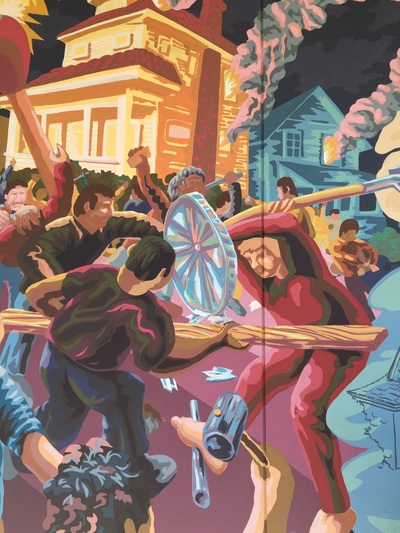 February 21, 1909, The "Greektown Riot" was a violent reaction to the shooting and killing of an Irish police officer by a young Greek Immigrant, who was arrested along with his English tutor, a young woman. Greek immigrants were the recipients of much animosity by previous immigrant groups because they were viewed as "strike-breakers." 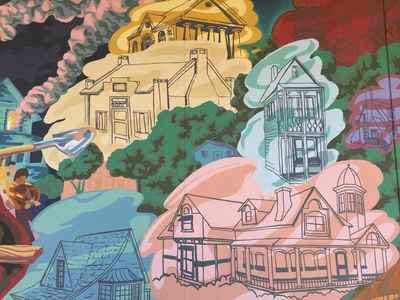 South Omaha is also known for its beautiful residences. Here, the Queen Anne and Victorian styles are depicted from photographs of actual homes north of L between 24th and 10th streets. 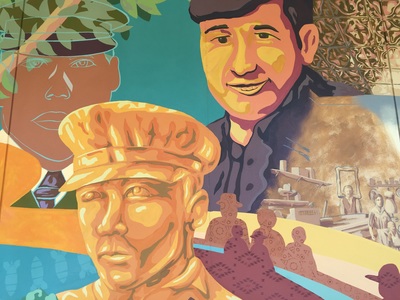 This section honors local military heroes, Ed "Babe" Gomez, who threw himself on a grenade during the Korean war to save his fellow soldiers. The outlined image is Manuel Puentez who has been MIA in Viet Nam since 1971. Below is the image of a soldier Miguel Hernandez Keith depicted in bronze, representing his memorial sculpture at Freedom Park. The marine earned the Medal of Honor for his bravery and death at age 18 during the Viet Nam war in 1970. 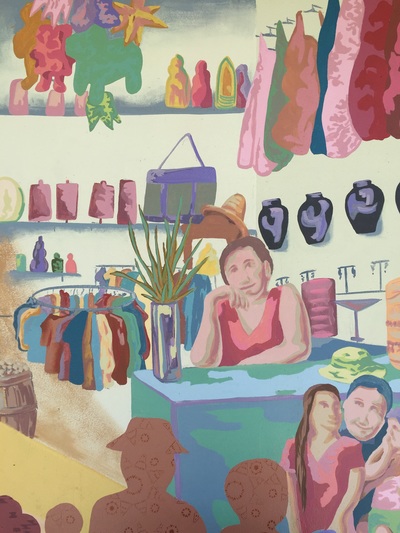 Along with the stockyards, local businesses have been the lifeblood of South Omaha. Small businessmen and women have occupied shops along 24th street for over a century. 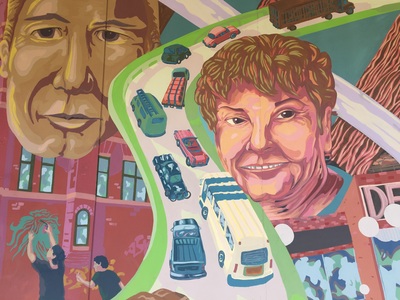 Jose Ramirez is honored on the left. He was a respected activist for Mexican-Americans. He advocated for ESL in the public schools and supported the hiring of Mexican-Americans on the Omaha police force. At right is Delores Wright, who worked in the packing houses during the day before going to the restaurant she opened in 1958 on 24th St., Howard's Charro Cafe. 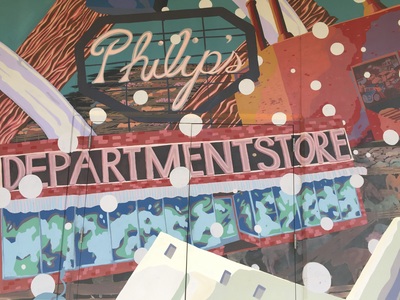 Sam Greenberg opened Philips department store in 1916. Greenberg was a Jewish immigrant from Romania, who had a generous spirit. Many children have fond memories of the annual ball drop. Greenberg hired a helicopter to drop balls filled with coupons for free items at the store near Christmas time. 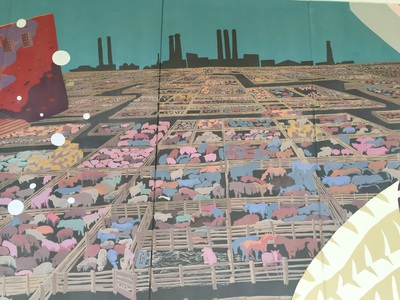 Stockyards holding pens. By 1955, The Omaha Stockyards were the largest stockyards in the world. On busy market days, trucks would line up on L street from 36th all the way to 72nd St. waiting to drop off livestock. 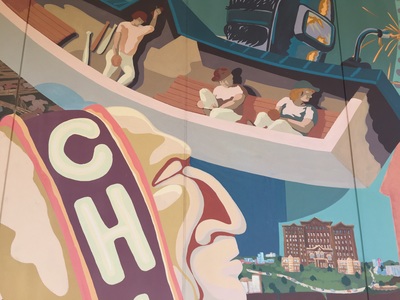 The Chief Theater was a favorite hangout for many Omaha youth. It was especially popular in the summer due to its air conditioning. The theater was on 24th street and was in use from 1945 to 1972. 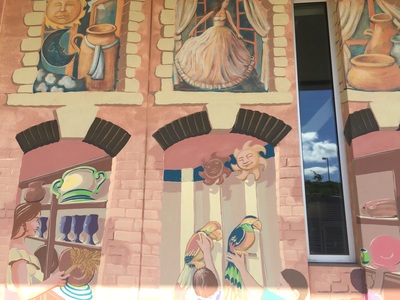 Several scenes at the end of the mural demonstrate the lively, colorful hispanic culture that is active along 24th street in South Omaha. At the end, Omahans of a variety of cultures including an Irish dancer, a Native American fancy dancer, and a polish accordion player grace the streets of South Omaha. 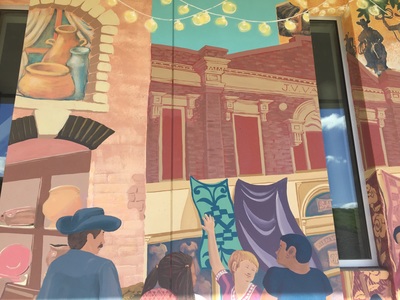 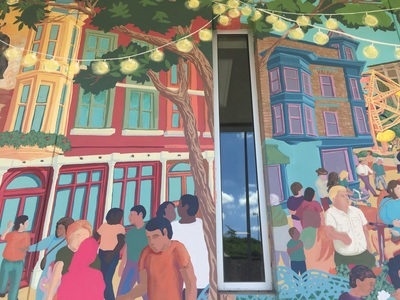 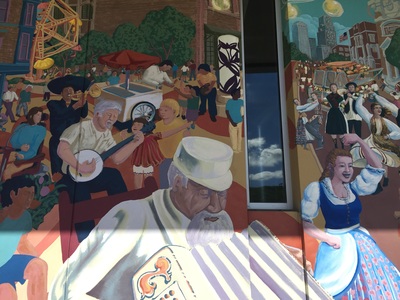 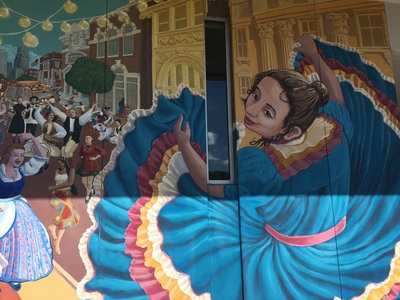